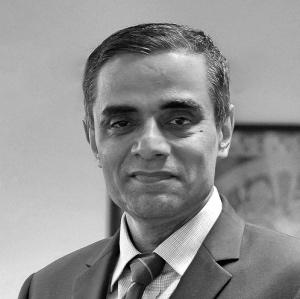 Ramesh Subramaniam has been with the Asian Development Bank (ADB) for over 24 years, since March 1997. He has worked in different functions and areas in over 25 countries across the various sub-regions of Asia and the Pacific. In his current capacity as Director General of the Southeast Asia Department (SERD) from July 2017, he is in charge of ADB’s relationship with the 10 countries in the Association of Southeast Asian Nations (ASEAN) and Timor Leste, as well as all of its Sovereign engagement. He has been a member of various Global Agenda/Future Councils of the World Economic Forum (WEF) since 2012, and currently serves as the co-chair of the ASEAN Hub of WEF’s Sustainable Development Investment Partnership. Ramesh has an MA in Economics from University of Madras, India; and a Ph.D. in Economics from McMaster University, Canada, where he was also a Lecturer (1992-93). He has been a Research Fellow on Industry at University of St. Andrews in United Kingdom from Dec 1993 to January 1994, and Rockefeller Fellow at Yale University Economic Growth Center from February 1994 to March 1997.

With a talent pool of over 430 globally and locally recruited staff, SERD has over $24 billion in projects under implementation. In addition, SERD also has several ongoing policy and structural reform programs with at least over $12 billion in funds disbursed and under monitoring. ADB’s new Sovereign commitments in Southeast Asia stand at around $7 billion per year in transport, energy, urban, agriculture and natural resources, human development, finance and public management sectors, besides regional cooperation and integration. From February 2020, the entire department has been focused on helping all countries affected by the COVID-19 pandemic. ADB mobilized over $5.3 billion in exceptional financing for economic and health sector measures in Southeast Asia. ADB also provided an emergency food grant for close to a million individuals in Metro Manila who had lost their jobs due to the pandemic. At present, teams are working under his overall leadership to mobilize vaccine support. The first ever vaccine financing project of ADB under the $9 billion APVAX regional facility was recently approved for the Philippines ($400 million), followed by Indonesia ($450 million), to be followed by assistance to Cambodia in the fourth quarter.

With a strong focus on policy and institutional reforms across the region, Ramesh’s strong interest has been in helping the region’s developing member countries reduce poverty, achieve equitable growth and attract greater private sector investments. He has led several important initiatives such as the establishment of the ASEAN Infrastructure Fund, various critical post-crisis counter-cyclical reform and restructuring programs in many countries, as well as post-disaster reconstruction projects across the Asia and the Pacific. The ASEAN PolicyNetwork and ASEAN Innovation Hub were established under his leadership in 2017, and he oversaw the establishment of the ASEAN Catalytic Green Finance Facility. Among other aspects of his work, Ramesh is most humbled by his role in formulating ADB’s support after several devastating natural disasters, including the December 2004 Indian Ocean Tsunami; 2006 Yogyakarta earthquake; 2006 Pakistan earthquake; 2009 Pakistan floods; 2013 Typhoon Haiyan in thePhilippines; 2018 Palu earthquake and tsunami in Indonesia, and most recently the 2020 COVID-19 pandemic.